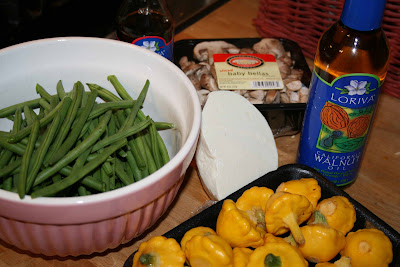 Now that we are a mostly veggie family I have hit a wall when it comes to Fall food. I MISS pork roast and slow simmered chicken. And no, that fake stuff that they say "tastes like meat" will just not do..HA!. no such thing. And don't even get me started on veggie broth instead of chicken or beef.
So my goal is to make hardy rich tasting meals that fill the soul as well as the stomach!! Last night I used some adorable baby squash, french green beans and baby portabellas that I quickly blanched and then sauteed in walnut oil. I then topped it with Mizithra cheese and put it in the oven to broil for just a sec... enough to soften the cheese. I made a balsamic vinegar reduction to dribble on for those who wanted it. ..yuummmmmmmm

I miss pork roast too mommy. We need to have an omnivore night at least once a week.