Things are coming together for the livingroom redo.. here are the photos I promised. First off is my sad sad sofa. Actually it's not in awful condition but the cats had ripped up the front part of the arms and the back pillows ( already gone in this photo) had bellied out to the point that they would not even stand up any longer. So I purchased three large feather/down pillows and some new fabric to cover them as mentioned before ( two as yet to be done ,seen here).. I then removed the panels from the front of the sofa arms. These had seen some major cat abuse and I decided to recover them in the fabric I had chosen for the pillows. This was fast and simple. I am still thinking of adding the fabric to the lower front edge to match a great sofa I looked at while out. It also featured mixed fabrics in a way I love but it's colors were all off for my room. Notice the use of the table knife as upholstery undoer?.. NOT an approved technique.. I should be ashamed. 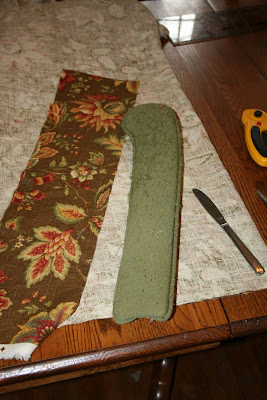 And here is my almost done "pimped" sofa. The large back pillows are slipcovered with long zippers on the bottom of each cover. I prewashed and dried the fabric so it would be safe to wash and dry later. I used a simple faux corded edge on the pillows since I knew they would get a lot of abuse and did not want to use expensive trim on them since some trims don't wash up all that well. I have some extra fabric and some fruffy trim for some small pillows that I hope to do later this week. The trim is left over from the new curtains I am just about done with. I had thought I would have them made since I am trying to get this project done. But after the $1600 quote to do two windows I decided that I could do them myself. That really is the bain of being someone who use to do this sort of thing for a living.. I can't stand to pay what it costs on the going market! 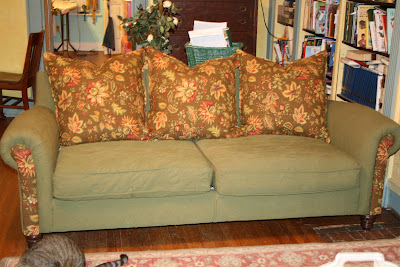 I got rid of my "real" sofa when we moved to TX. I have a futon...nice one, but still a futon. I am not a 20 something anymore! I want REAL furniture. Any ideas to disguise a futon??

What a remarkable change! Good job!