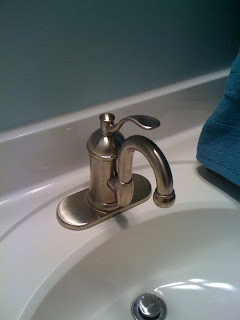 Say hello to my new friend
After a good deal of cussing and plumber-style gymnastics this beauty is now in place. Honestly the faucet was really rather easy to install and things were going along rather well... practically like little woodland creatures were scampering around bringing me tools.
That was until it came time to hook up the water lines. Being the thrifty sort I thought I would reuse the old water supply lines { que the horror music}..ohhh I was soooo thrifty ~patting self on back~  of course then I promptly cross threaded the first line to the point that it was wedged tight. It was stuck.. stuck hard.. so much so that when I tried to loosen it it started to torque the copper line (bad).. thus the creative language began..     10 minutes later it was loose and I felt like a limp dishrag!  1 more trip the my local ACE ( can I say how much I love having a hardware store 1 mile from my house??)  new water lines were in 5 minutes after getting home.. 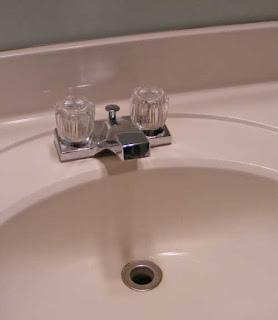 and say goodbye to the old!

Email ThisBlogThis!Share to TwitterShare to FacebookShare to Pinterest
Labels: skip to my loo