Houston we have a wet and icky problem.. Skipping along 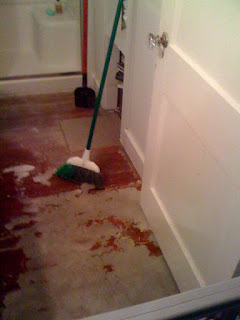 Oh what a wicked web we weave when we think we are going to do a fast and easy bathroom redo! 7pm Tuesday and I am sitting here like a pile of rather foul smelling jello. Thinking that maybe if I take on an assumed name and book my bus ticket now I can leave town and not have to think anymore about  what I have gotten myself into.  Painting of the vanity was an obvious and frivolous distraction in the vain hope that the whole flooring thing was not going to be as awful as I thought it was going to be `  is.
After toady's Lowe's trip in which I found out my loverly new super toidy has been recalled and that buying a half way decent faucet costs a freaking lot I came home to tackle the issue of the floor.  " Lucky" for me the floor was already peeling up in one area ( that would be the area I kept covered with a rug for the past year).. so I started there only to be greeted by an odor that can only be described as a mixture of  badly tended nursing home and cat box.  It seems that the odor I have been blaming on the boys has actually been  the cracked toilet in question leaking under the flooring! GAG!!!!!
So after removing two layers of flooring and  what felt like 50 pounds of leveling compound the floor is now clear but is hosting a SERIOUS rolling wonk that is going to have to be dealt  with ( prayers accepted)   but tonight to sooth my savage soul I will paint the walls.