Topiary for less than your Mortagage Payment 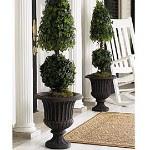 Topiary - classic addition to a Southern front porch and I wanted some. What I did not want was the price tag.  The local up-end decorator store had them for over $200 each. While they were quite nice the idea of plopping $400 for fake faux ivy was a bit troubling.
( My porch is in deep shade, it's silk or nothing there, don't judge)
So I have been hunting for deal for topiary since last Summer and had still not had any luck when a bit of inspiration struck in the way of a sale at the ever so wonderful Hobby Lobby.
My first find was huge really nice ivy clusters marked down to $2.00 each ... from $12.00 each.. This I have to admit was a bit scary..why were they at this low low price?   Turns out that the little red bits on them were supposed to flocked ( fuzzy) and they came in sans-fuzz so they wanted them OUT of the store ASAP.
IVY COST $20.00
( notice red bits in the  following photos, they have since been plucked out )
ooooook..
since I was going to yank those red bits off anyway this was not an issue for me so I scooped up 10 of the clusters ( which ended up as a whole cart full!) and then strolled over to the metal section for more inspiration.
In the metal work/garden section it was a 50% off wonderland and I scored a rusted metal garden trellis thing ( I am sure it has a real name) for $12. At the check-out I point out that two of leaf details were missing and she knocked off another 20%
( You got to love that about the Hobby Lobby)
TRELLIS COST - $ 10ish
This is where I should be showing you a photo of said metal piece but I did not shoot a photo of it ( sorry)
Ok.. time to put this thing together.
First step was hauling the very dirt filled urn form the side of the house were is was holding dead over wintered flowers that I forgot to water ( we are classy like that)
URN COST $ 0
( back when I got it 3 years ago, $20 at HomeGoods)
Since it already had dirt all I did was top is with moss and wedge in the trellis  nice and tight. 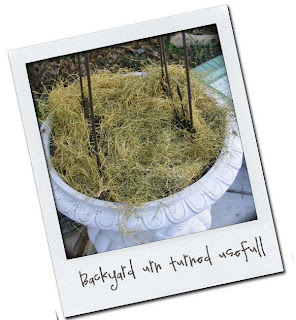 The moss is one bag of American Moss from Hobby Lobby ( used my coupon for that)
$2.50 Next I started putting in the bunches of ivy around the base, I ended up with 4 around and two in the center that I used to start the ivy-climb effect up the trellis.  With the other bunches I cut out the long vines and used them to twine up the structure and used the shorter bit to fill out the base. 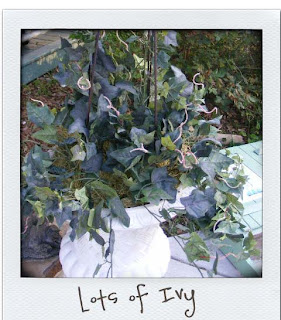 A bit of fluffing and twisting and I was all done!
Moved it to it's new home by the front door where it will live happily ever after for this season*. 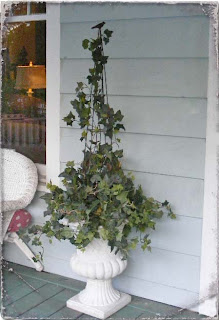 Email ThisBlogThis!Share to TwitterShare to FacebookShare to Pinterest
Labels: Feathering My Nest

This is just too cute and the price -- fabuloso!