I Really wanted to Love it... really I did

Like most of the crafting world I was excited to hear that Martha came out with a new line, this time having to do with paint. So with my 40% off coupon in hand I went to Michael's to scope it out since I was not one of those lucky ducks to get a huge box of the stuff for free.  The  in store set up is beautiful and well thought out but I am a dork and did not take a photo. {insert your imgination here}

I picked out a multipack of paint in the satin finish, the sponge pouncers and a set of very pretty stencils in a doily pattern. With using the coupon this came up to $34, so just about what you pay for other such materials.

I decided to use the supplies as part of the restoration of an old amroire in my living room. First step was painting the inside, I used some Annie Solan Chalk Paint for that, the color was Old Violet which is a nice dusky shade.. love it.

After that dried I decide to add the doily stencil to the inside to perk it up.. This is when I got a chance to use the paint and the pouncers, and stencils.  The stencil pattern is very nice but multiple patterns are grouped on one plastic sheet making them hard to use. I cut mine apart but this was an annoyance to be sure since it left little border area and over painting became too easy and messy.

To hold the stencil to the back wall of the amoire I used embroidery spray adhesive .. it worked great... M.S. might have had some in the line, but I did not look. As I mentioned I used the satin paint and the foam pouncer, and I like the pouncers well enough. They have a firm hand and are easy enough to use but I don't think they trump a traditional  stenciling brush in the area of control or ability to finesse the application of paint. 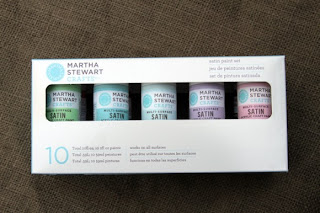 As for the paint, so far I am not wildly impressed.. yes I know stone me now. Everyone from one end of the bloggy world to the other is raving about this stuff but so far I just am not feeling the love. Now don't get me wrong, it is nice stuff and the color pallete is what you would expect and the choices of finishes  is good but angles did not sing and double rainbows did not break out over my house when I used it.  It goes on just like any other upper end craft paint that I have used, which was sort of a bummer since I really really wanted to love this stuff with a white hot passion of the ages.

Martha does have a  fabric medium that you can add to paint to make it washable ( but for the record this product by other vendors has been around for years) and according to the hype you bake this paint to a degree that you can hand wash it on glasses and such and it will stay put.. so that is cool, but again, already on the market.

Man what a crabapple I sound like!.. when really this is nice stuff but so far I am not getting the orgasmic paint rush about this stuff that eveyone else has...maybe I was suppose to sniff it??

..and now obviously we all know I am going to tell the truth about stuff and have sealed my fate to never  be sent my own big box of supplies to show off on my blog...pitty
What do you think?... Have you tried these products..let me know!

Ok-you are cracking me up! I love that you were so honest. I have yet to try it, but I am not a big martha product line. Guess I should go purchase some and add my big old opinion to the blog world. On a happy, super happy note. I LOVE annie sloan Chalk Paint! (ascp) LOVE it! I will have to try that color!
Thanks for making me giggle and keeping it real!

Your the first person whom I've seen who doesn't love it but I like honest opinions and was starting to wonder if people were just putting me on. I haven't tried it. hm...