How to Kill the Love of Sewing - Just My Opinion 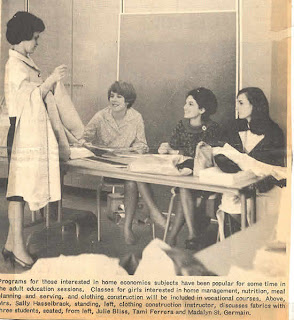 A lot of people bemoan the loss of home-ec from the class listings of many high schools around the nation. Cries from the creative community ask "how will our children learn these age old arts without these classes" and yet in my very unscientific poll about why people fear sewing Home-ec teachers were often mentioned as total creativity killers and the ones who made so many girls ( and some guys I assume) shun sewing like a bag full of steaming puppy-poo on a cold winter morning.

To be sure there were some good Home-Ec teachers out there but even in my own schooling with the exception of one the others obviously lived with a seam gauge shoved where " the sun don't shine" because they were not fun or creative or inspirational, and they were a we bitty pissy that I knew more about sewing than some of them.  I had one who insisted that a hand picked zipper was the ONLY way  ( wrong, nice but wrong) - one who I think got her jollies off of making students rip out seams so many times that the fabric would shred and then she would count points off for shabby fabric- crazy making for sure!

This cadre of uptight mirthless women who cared more about a perfect 5/8th inch seam than the creative joy filled process of sewing were perhaps the downfall of  Home-Ec as we know it.  In their wake leaving the whole generation after those who had been traumatized with no place to learn and no one to learn from. Sure maybe there was a grandmother or two out there willing to teach  but for the most part this was  the great die off of sewing for our culture... The Sewing Dark Ages.

But like all low points in history we are now in a sewing and creativity renaissance . A time that invites those who were burned by bad Home-Ec juju to come back and try again. And for those who think they might want to sew to try it without fear of being shamed or mocked. A time full of creative people expressing themselves with thread, fabric and fiber and passing their love on through classes, article and online tutorials.  It is a good time to sew people.. join the party.

Email ThisBlogThis!Share to TwitterShare to FacebookShare to Pinterest
Labels: Just my Opinion

I had a few pissy sewing teachers too! Your post made me laugh!

I had only one "sewing teacher" my "Family Life" teacher. I came out of that class knowing I could make anything if I just tried.

Oh, and I should have said "Thank you Margaret Borders!"

My highschool Home-Ec teacher didn't really like sewing (she preferred "nutrition"). I actually had more skill & experience than she did! But do you think she'd allow me to go on and do something creative to match my ability?... nooooo. Had to sit around and make a miniature "bodice top" which featured only basic seams, darts and hems. So boring. Ah well...Easy A!

I was one of the few who had caring grandmothers who showed me domestic skills that I have revived recently. In college I was studying art, but grew tired of it because of uptight teachers who could not decided what to grade on and if they just didn't like you, you received a bad grade. Art and beauty is unique and individual and should be looked at as such.

My Domestic Science teacher made me so unhappy, she is the villain of my (WIP) novel.

Speaking as a teacher, I have to admit the home sciences teachers were a strange bunch and sadistic to a man. I mean, a woman.

I taught myself to sew making Barbie clothes for my little sister. She had the only Barbie in town with a purple wool maxi coat with rabbit fur trim. Later I learned to make "real" clothes using the direction sheets in Simplicity patterns. The one thing I remember about my sewing teacher was her looking over my shoulder while I sewed a set in sleeve and then AFTER I had finished, telling me I had to do it over because it wasn't evenly gathered! At the time I was wearing an outfit I had sewn for myself, and my younger sister in the fourth grade had on a cute little dress I had made for her. The teacher,ahem, had on "store bought" clothes.

I've always wondered what happened to home ec --- it didn't exist at my high school 15 years ago. You couldn't learn sewing at school unless you were in the costuming department, an extra curricular class. As a self-taught sewist now, I so wish we'd had it in school, instead of drawing or ceramics or some art class that didnt mean a thing to me!

My degree is in Home Economics Education. And while I never taught full time in the public schools, I have done my fair share of subbing in the Family and Consumer Science departments. I must say I agree with most of what has been said. In my perfect world, the students would learn to sew on a button, repair a seam, fix a hem. Life skills, not spend hours and hours hand embroidering pillows that are made of such crappy felt that it pills before they are even finished.