I Believe in Unicorns 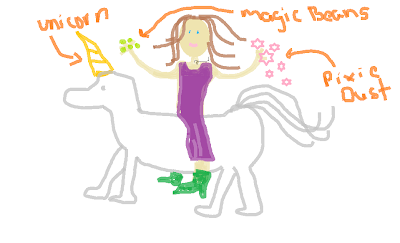 I believe in unicorns.  This might come as a surprise to some since as a general rule I am rather sensible and no nonsense but on this I believe.

And as long as I am going to believe in unicorns I am going the whole way.. magic beans, pixie dust.. the works, it just seems easier since really I have no choice.

You see if I believe in these things I can also believe that the scary long hair I found on my neck  had not been growing there for weeks if not months.

I found it this morning as I ran my hand over my neck during the hazy moments of waking.. only to sit bolt upright in bed as I stretched it out to a length that one could only call shocking.. truly shocking. In fact had I had two more of the same strength and length  I could have braided them up and had something worthy of Rapunzel.

But instead of having to think that this hair has been on my neck for virtual eons  for all to see and wonder why I have not "taken care of that" I have decided that it grew magically over night, much like the story of the bean stalk and the magic beans or unicorns appearing out of nowhere.

So you see it really is a very sensible decision on my part.

You will have to excuse me now..  I have to feed my unicorn some pixie dust so that I can then leave to go buy a much higher powered as well as lighted makeup mirror since there is only so much magic a girl can take in one day.

Flaun of I Plead Quilty! said...

I'm finding disturbing hairs on my neck, too. I hate to think it, but I'm sure it has something to do with age and hormones.

I'm convinced those hairs sprout overnight. I've found a couple in the past year or so and I KNOW the darn thing hadn't been there the day before. *sigh* guess it's time for me to feed my unicorn too.....

They do grow overnight! There is no other explanation. I find them on my cheeks, white and shining ethereally...maybe I am part unicorn.

They do too grow overnight! There is no other explanation. I get them on my cheeks. At least they are white and shiny...hmm, maybe I am part unicorn?