Save This Quilt- Thinking Out of the Box When Things Go Wrong with Your Project. 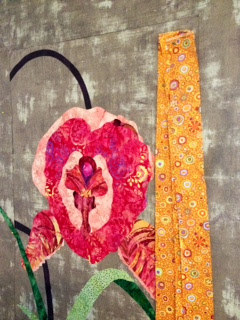 Sometimes plans in my head don't actually work out when it come to fabric and sometimes my lack of a plan bites me in the ass. In either  case I am stuck to figure out how to either save a project or if I want to scrap it.

Truth be told I rarely scrap a project but I will put it away for a jolly long time until  I once again trip on it and find new inspiration in what was before a project that was going nowhere.

In the case of "Rare Beauty" I had done the center panel and then was stuck.  I felt like it was too narrow. I added mitered trim borders.. better, but still stuck and missing something.


And there it sat... and sat..... and sat some more as I would try ideas, one after an other only to reject them for some reason or another.

I suspected that I was going to have to take off the borders and damn if I did I not want to do that since I had mitered them and had no more of the fabric with which to replace them.

Since the whole heart of this quilt was applique I came up on the idea of adding applique strips that would look as if they have been pieced into the border... now I was getting somewhere. 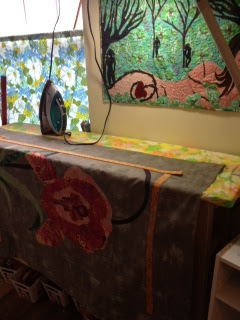 to hold it in place as I made sure it was lined up exactly with the seam. 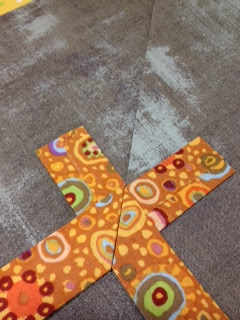 also made sure that I was getting a perfect miter at the corners.. after all if you are going to fake it you need to do it right! 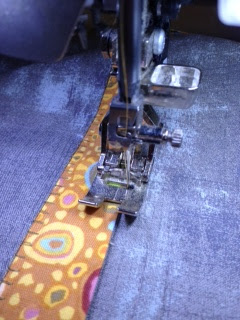 Next I went around the whole (new) border with a custom sized buttonhole stitch ( thank you Bernina 830!) - Once again the Roxanne Glue-Baste-It

was an amazing help here.. no scooting or buckling . just smooth sailing the whole way!

Have you gotten the point about how much glue can be your third hand in the sewing room? 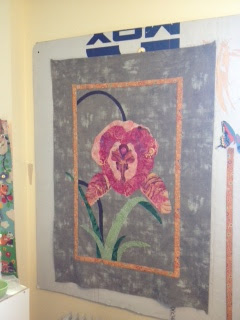 I have no idea what is next but at least I am back on the path to getting this piece done!

Email ThisBlogThis!Share to TwitterShare to FacebookShare to Pinterest
Labels: quilting

So far it looks like you are nailing it!

Thanks Marcie, I am now thinking about the quilting..hmmmmm

Been using glue for a long time! Except I use Elmer's Washable School Glue with a small tip I attached. Its one of my "can't live without it" items!
Sherry

Sherry, I have a bear of a time finding the Washable version around here.. I need to start looking harder it would be cheaper!

I don't even know how I stopped up here, however I thought this post was good. I don't know who you
might be however certainly you are going to a well-known blogger in case you are not already.
Cheers!
My website - Cheap nike nfl jerseys