Well it is over for another two years which is good since it might take me that long to recover!  The QC ladies put on a wonderful event and I know they must be tired. On my part my legs still hurt from standing so much, my voice is horse from talking and I might weigh a few more pounds from a possible over indulgence in chocolate, and  eating out.  I spent the bulk of my time assisting in the classroom of the wonderful Angela Walters as she taught people how to rock their negative space and when not doing that I was shopping and making some wonderful connections since I was also at QC to meet and mingle with other BadAss Quilters.

The venue was at the Austin Convention Center.. large, open and as it seems just about right for this conference.  Hall number 1 was the where the quilts and the vendors hung out. Room A had the all day every day rotating series of lectures. Upstairs (not shown) had all the classrooms 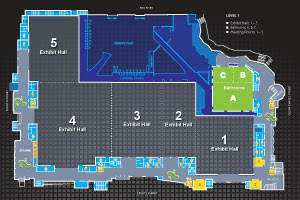 Ample bathrooms were to be had unless you were a guy- all of the bathrooms had been "converted" (via putting a ladies room sign over the men's) into ladies rooms but this left many poor guys looking confused and in need. More than once I checked a bathroom and whipped the women's temporary sign off in order to let some guys do their thing..  As it turns out one of them might have been Amy Butler's husband David - a wonderful designer in his own right.. I had no idea, he as just a confused guy in need with a full bladder..but funny ..no?

Of course I can't fail to mention the shopping at QC. There were a nice but not overwhelming selection of vendors who attended and over the next week I will be talking about specific ones in greater depth but over all the atmosphere was festive and colorful as exemplified by the Swirly Girls booth which most of the time was so busy that I had a hard time getting a photograph.  These gals have some adorable patterns  and people were just nuts over the new line of Monogram Buttons.

And of course there were quilts, lots and lots of quilts. Some of which confused me, some which amazed me and and think that is how it should be.  This quilt was by Tula Pink herself and was quilted by the ever so awesome Angela Walters. For some reason it just resonated with me more than any of the others. This quilt was a modern riff on a classic Dear Jane quilt with no two blocks the same.. it made me smile.

And yes there were parties,drinks and real deal tattoos to be had (Not by me!). The Friday night 80's party found us shaking it up (and down) on the dance floor with 100's of other quilters who have obviously not lost their stuff just because they play with fabric. I rocked a side ponytail complete with scrunchy and Robyn tripped the light fantastic with a liberal use eye shadow and some very 80's feathers dangling from her hair.  It was fun but boy did the next morning come early.

and the people... oh the people... I met SO MANY wonderful new friends.. each with amazing talents and even the ability to rock the Quirt ( yes a vintage quilted skirt.. jealous much?)

This is Tinkerfrog and she is one BadAss quilter indeed.. I enjoyed dinner and lots of hot quilty ( and non-quilty) conversation with her on the night Robyn and I and oh, about  20 others invaded the Iron Cactus in downtown Austin -

I would be remiss to not say that our table was filled with so much amazing talent and names that you would know that I was sort of wacked out ( might have also been that I really don't drink but had an IC margarita on an empty stomach!) but each and everyone of them was so nice that it will be a memory I will cherish for a good long time.

Over the next few weeks I will have more to share.. including the amazing fabrics I bought at QC, the really NICE.. and I mean NICE designers I met and  I will also dish on my true feelings about modern quilting and if my feelings about it have changed since going to the show ( hint- they have).

Were you there?... Did I meet you?  Leave a message here

Were you there and we missed each other?... I am sad!.. leave me a note so we can still connect.

Great recap--I hadn't noticed the signs on the doors to the bathrooms! I'm also looking forward to your thoughts on modern quilting as a former archaeologist and social historian nerd, I really find the whole question of identity and fabrication of identity fascinating. To see it unfold before me is *really* interesting.

Hi, I met you in Angela Walters classes which were awesome. Can't wait to get back to my longarm to practice. Was really fun to meet in person people from the blogging world.

Loved meeti g you a Quiltcon

Here is my summary